How well do you know the spaces and places constituting greater metropolitan Miami?

This installment of the Miami Geo Quiz takes us downtown, where one can find multiple fantastic murals, some of which are by renown street artist Shepard Fairey (“Obey”).

Fairey is probably most famous for his Barack Obama “Hope” poster. Once one makes that connection, it becomes easy to recognize his visual aesthetic.

So, take a look at the photograph below.

Miami Geo Quiz #7: Provide the intersection (street and avenue cross-streets) at which this mural is located. Be sure to leave your response in the comments section below.

The streetscape clues in this image are blatant, so a correct response is expected quickly. Don’t let me down, Miami!

As a quick aside: prior to posting this particular photograph for this installment of the Miami Geo Quiz, a return visit to the site of this mural was made to ensure that the mural was still present. 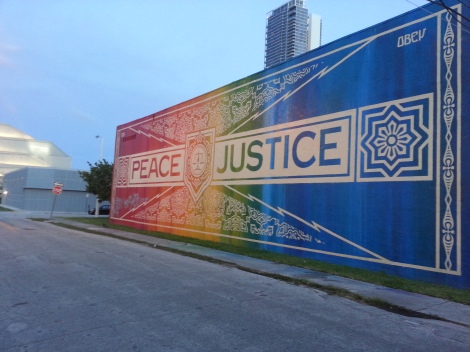 As April 2014, the “Peace & Justice” mural is still intact, which is not always something to be expected. Read, for example, this WLRN piece on the issue of “Wynwood’s Evolving Street Art”.

However, since taking the original March 2013 photograph, the mural has been vandalized.

It now bears an additional bit of text which clearly required much less talent to create than the original piece: “Does not exist”.