A scientific article just published in the American Journal of Preventive Medicine reports that a person’s proximity to Miami-Dade’s urban development boundary and central business district impacts walkability, and, by extension, has important health implications. 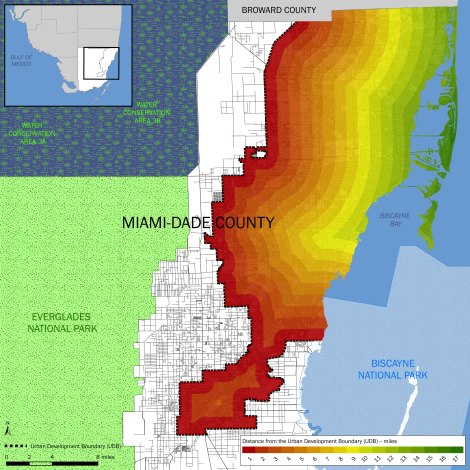 As a reminder, the urban development boundary is a zoning tool that restricts certain types and densities of real estate development in the western and southern parts of the county, where ecologically-sensitive lands like the Everglades ecosystems, water conservation areas, and agricultural activities are located. (For more background on the UDB, read Miami Geographic’s “Meet the UDB” post.) 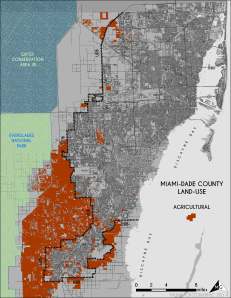 As you move westward through Miami and approach the UDB, you’ll notice lower building densities, larger block sizes, a more disjointed street network, and a more monotonous land-use configuration, dominated especially by single-family (as opposed to multi-family) residential use.

Within the shopping center is a grocery store (Publix?), next to a pharmacy (CVS/Walgreens?), not too far from from a large gym (LA Fitness?), next to a health supplement store (GNC / Vitamin Shoppe?), a Starbucks coffee shop (no competition there), and some other assortment of storefronts typically occupied by large corporate entities. 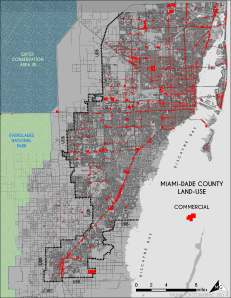 Needless to say, within the Sea of Asphaltia, you’ll also invariably find a couple of nearby islands: perhaps a bank, a fast-food joint (e.g., McDonald’s, Burger King, Wendy’s, Taco Bell, etc.), and almost certainly a gas station or two.

The central business district, on the other hand, represents the urban geographical inverse of the UDB.

As you traverse the city in an eastward direction, you’ll notice a greater density of buildings, the size of blocks decreasing, better connected streets, more diversity in the types of land-uses, and, most importantly, you’ll notice more people out-and-about on the streets, on their very own two feet. 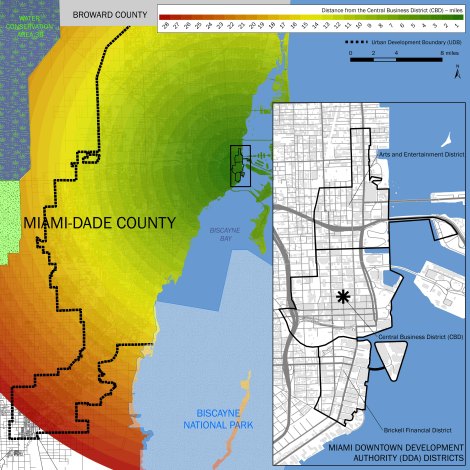 The hot-off-the-press article, titled “Walking and Proximity to the Urban Growth Boundary and Central Business District”, was conducted by an interdisciplinary team of researchers from the University of Miami’s Schools of Medicine and Architecture.

(Full disclosure: I am a proud member of this research team and co-author on the study. All views expressed here in Miami Geographic are, of course, my own and not to be associated with any other person or entity.)

Address data from 391 Cuban-immigrant study participants were geocoded to map-out the distribution of where they lived throughout Miami-Dade County.

Distances were then calculated from each of the participants’ homes to (1) the urban development boundary, and (2) the central business district.

After controlling for multiple socio-demographic/socio-economic variables, the team found that people who lived farther from the UDB were likely to walk more than those who lived nearer to the UDB.

Each one-mile increase in distance from the UDB corresponded to an 11% increase in the number of minutes of purposive walking.

Source: “Walking and Proximity to the Urban Growth Boundary and Central Business District”

[E]ach one-mile increase from the CBD corresponded to a 5% decrease in the amount of purposive walking.

Source: “Walking and Proximity to the Urban Growth Boundary and Central Business District”

Sprawling neighborhoods encourage auto-centric, auto-dependent lifestyles that offer comparatively fewer opportunities for that most basic, most natural of all human physical activities: walking.

According to the Centers for Disease Control & Prevention (CDC), the rate of obese and overweight adults in Miami-Dade County is a striking 67.4%.

That’s right: More than two-thirds of our county population is obese or overweight.

Maybe the easiest and most effective way to counter the growing obesity epidemic in Miami at the public policy level is to redirect the typical Miami model of development away from sprawling suburbs eager to encroach upon our most critical natural and agricultural resources.

Perhaps Dr. Claudia Miller, physician and assistant dean at the University of Texas School of Medicine, was right when she provocatively commented that, “Architects have a greater ability to improve public health than medical professionals.”

More information on the study, including commentary from the study authors, can be found at this University of Miami School of Medicine UHealth news item, “New Study Reveals Health Hazards of Building Farther West in Miami-Dade County“.

A recent audio interview with the study’s lead author, Dr. Scott Brown, can also be heard on the “Fried on Business” radio show, hosted by Jim Fried: “Scott Brown: Walking for Wellness“.