The year 1896 is etched deeply into the minds of most Miamians.

That’s the year Miami incorporated and became a municipality — what, from a legal perspective, is known as a “municipal corporation”.

Eighteen ninety-six is when the few hundred people living in that small, but rapidly growing, town along the banks of the Miami River gave birth to the City of Miami.

That puts the age of Miami at a mere 118 years, a city now just hitting puberty as far as major US cities go.

While Miami’s birth year is well known, I confess that, prior to the beginning of this week — when the Miami-centric regions of the social media world started buzzing with announcements of the occasion — the specific date of incorporation was unknown to me.

That means Miami turned 118 years old this past Monday.

With this nifty piece of information freshly deposited, I wondered, naturally, about the the actual circumstances under which the city was born.

I fortunately came upon a little gem of a book published in 1996 to mark Miami’s centennial: Miami Diary 1896: A Day by Day Account of Events that Occurred the Year Miami Became a City.

The book presents an unparalleled compilation of historical primary source materials illustrating the daily goings-on in the Miami of 1896, the year it legally became a city bearing that name. (Although, as we’ll see below, we may have ended-up referring to Miami as something completely different altogether. . . .)

The Miami Diary 1896 draws from nearly 70 different sources, ranging from the memoirs, diaries, and family records of Miami’s early pioneers and frontiers-people; to important Dade County government documents; to articles published in the up-and-coming news outlets of the time; among others.

Some of the book’s most prominent source materials are articles from The Miami Metropolis newspaper. The name for the paper was suggested by Mr. Henry Flagler himself, the so-called father of Miami who brought-in the railroad just a few months prior to incorporation. It marketed itself as the “first paper ever published on Beautiful Biscayne Bay”. 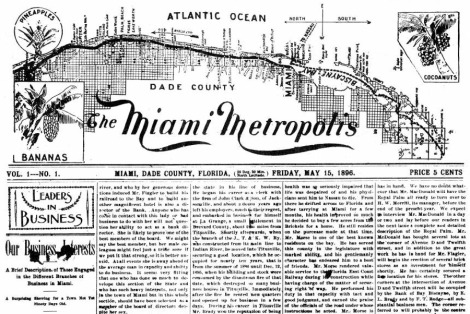 The first issue of The Metropolis was published on May 15, 1896, just 10 weeks prior to the city’s incorporation. New issues were published every Friday.

At its initial publication, a one year subscription to The Metropolis cost $2.00; six months would run you $1.00; three months, $0.50. A nickel would buy you a single copy.

The following passage, printed in the July 31, 1896 issue of The Metropolis, captures the hitherto unprecedented growth and ascension of a city built out of a wetland wilderness.

The meeting for the purpose of incorporating the City of Miami was remarkable in many respects, for the large number of votes polled, for its unruffled harmony and for the expeditious manner in which all business was handled. What other city in the State of Florida ever sprung into existence with a list of 400 registered voters, and at its meeting for the purpose of incorporating polled 344 votes?

That is what we did in Miami, and remember the site of the present city was a tract of uncleared, wild land less than six months ago, and that the railroad only reached here on April 15th. Miami has made a most marvelous growth in the past few months. May she continue to grow with the same rapidity for many more to come.

Also reported on that same date in The Metropolis were the words of a telegram sent from Henry Flagler replying to the news of the successful vote to incorporate.

I congratulate the citizens of Miami upon the harmony which marked the election yesterday and trust that that auspicious beginning will result in future prosperity which will equal the most sanguine expectation of the people of the new city.

Oh, and about the name the city ultimately chose to adopt, this last piece, also from the July 31st issue of The Metropolis, explains that things could have gone a lot differently:

It was the sincere desire of a majority of the voters at the city election last Tuesday to vote for the name of Flagler for the new city, but when it was ascertained that such a course was strongly objected to by Mr. Flagler, everybody was willing to respect his wish. This sentiment was so strong that the name of Miami was adopted.